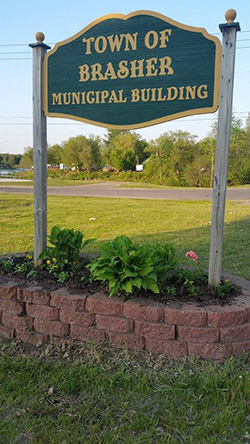 Brasher is a small northern New York town located in St. Lawrence County, New York, USA. The population was 2,512 at the 2010 census. The town is named after Philip Brasher, an original landowner.

Settlement began after 1815 as the town was organized in 1825 from the Town of Massena. In 1827, a small part of the town of Lawrence was added to Brasher. The iron industry played an important part in the early history of the town, initially mining and smelting, but later including the production of stoves and other goods.

There are nearly 20,000 acres of NY State owned forest lands in the town and the DEC has a maintenance facility located near Vice Rd. in Brasher Falls. Many miles of Trails are maintained in the State Forest. These trails are used for hiking, hunting, fishing, cross-country skiing, horseback riding, snowmobiling and all terrain vehicles.

Stay up to date!

***The Town Board of the Town of Brasher, County of St. Lawrence, New York will hold the monthly Town board Meeting on Wednesday February 8th at 4:30 PM at the Municipal Building in Brasher Falls, N.Y.  All meetings are open to the public, and everyone is welcome to attend.


The Brasher Planning Board will meet for their quarterly meeting on Wednesday February 15, 2023 at 6 PM at the Municipal Building in Brasher Falls, NY.  All meetings are open to the public, and everyone is welcome to attend.

If you have any questions or feedback, we're always here to help!